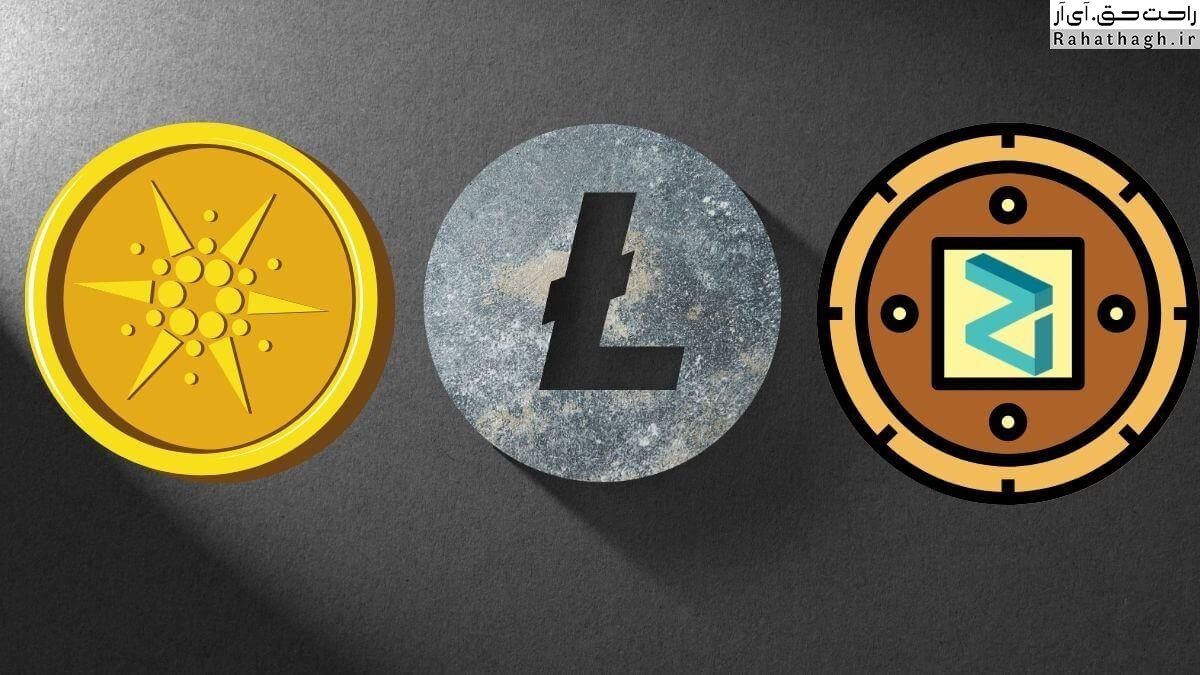 Michaël van de Poppe, a leading digital currency trader and analyst, predicts that Cardano (ADA), Litecoin (LTC) and Ziliqa (ZIL) are ready to begin the next phase of their bull cycle.

In a new video, the popular analyst told his 76,700 followers on his YouTube channel that it was time for Cardano to complete its consolidation phase against Bitcoin (ADA / BTC).

Looking at the long-term chart, the trader added that the ADA / BTC pair is still in its early stages because he believes that the pair has a lot of upside potential.

Regarding the ADA / USD currency pair, he says that the failure of the immediate resistance of this currency pair will push Cardano to the $ 2.40 level.

"I think when we break this red line ($ 1.36), we go past the previous record high, start consolidating, and then move on, because then, with the previous resistance breaking, This level becomes a strong support. Until then, we will just keep moving. "

In addition to Cardano, this strategist also monitors Litecoin. According to him, this currency is also ready to start a 65% move against Bitcoin (LTC / BTC).

Another of Van de Poop's most popular altcoins is the Ziliqa (Chinese blockchain for enterprise solutions). According to him, the ZIL / BTC currency pair is in a strong uptrend and is now ready to grow more than 120% of the current price level at 0.00000363. 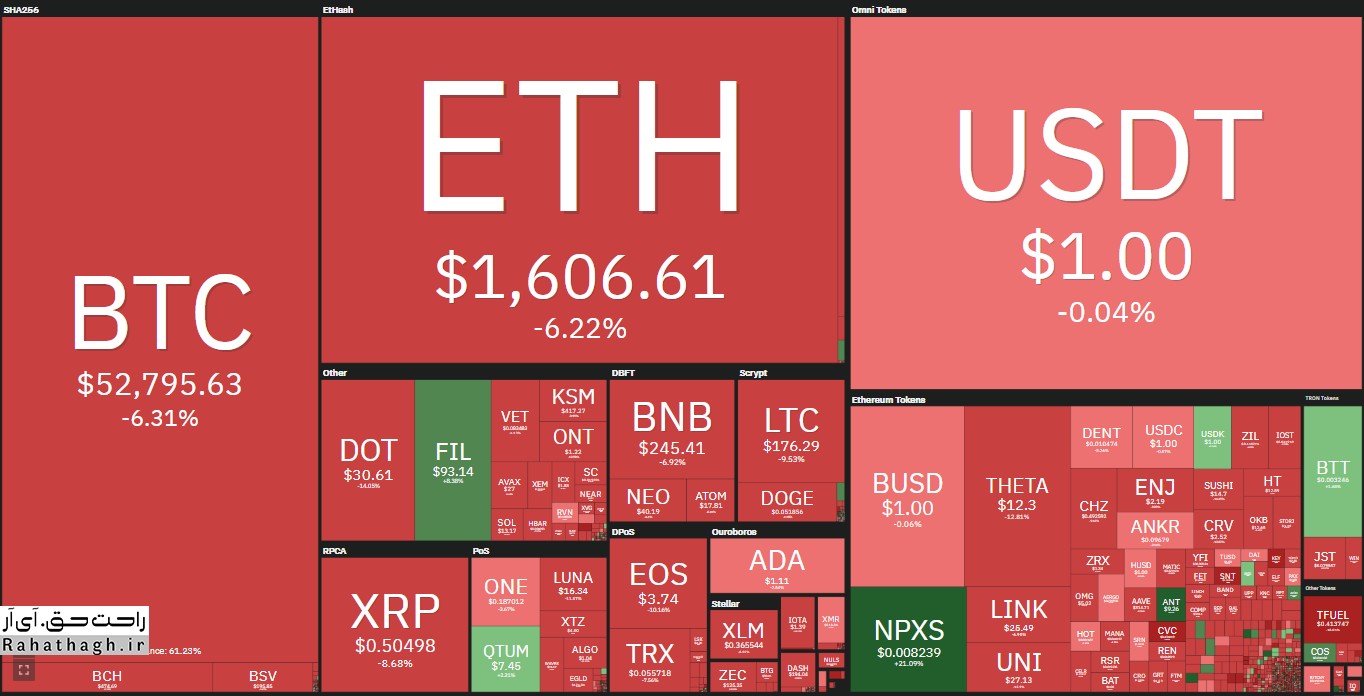 The situation seemed to change in favor of this superior currency after the news of the acceptance of Bitcoin by Tesla as a payment option was published. At the same time, however, Bitcoin rose by several thousand dollars to $ 57,000. But since then, Bitcoin has fallen below $ 6,500 to $ 5,500 a day. Despite the return of the price to the level of $ 53,000, Bitcoin still shows a 4% decrease in 24-hour timeframe.

What is more remarkable than the fall in the price of Bitcoin is the devaluation of the currency below $ 1 trillion. According to Bybt data, the increase in fluctuations since yesterday has led to a decrease of more than $ 2 billion in the total market value of this currency.

Altcoins drown in a sea of ​​blood

After a few days of margin trading, the Altcoins market situation looked good yesterday with slight gains. Atrium pioneered this growth, rising to $ 1,700 and $ 1,740. However, the situation has changed completely in the last 24 hours. The sudden drop of $ 200 in the price of ETH caused this asset to reach its daily low price of $ 1550 a few hours ago. Since then, ETH is still below $ 1,600, down more than 6 percent.

Finally, the cumulative capital of the cryptocurrency market fell by $ 150 billion to $ 1.620 trillion.

An overview of the cryptocurrency market Thursday, March 11

An overview of the cryptocurrency market Thursday, March 11

Bitcoin, which was close to the last record set at around $ 1,000, was once again rejected and fell below $ 56,000. However, minor corrections among the Altcoins allowed BTC to regain some of its lost dominance in the market.

Bitcoin was only 2% away from its latest record

Over the past few days, the market's top cryptocurrency has been on the rise after falling to $ 47,000. On the other hand, as organizations became more interested in Bitcoin, its price rose.

The incident hit the $ 50,000 level again, but the cows did not stop at that level, pushing the cryptocurrency to its two-week high of about $ 57,000. According to data released by Bitstamp, the highest daily BTC rate yesterday was around $ 57,400. At this time, the distance between Bitcoin and its highest price level reached about $ 1,000 (1.75%). However, the currency failed to defend this level and reached the current level of $ 55647 following the latest price corrections.

What is remarkable is that the bitcoin market capitalization currently remains well above the $ 1 trillion mark.

The value of more replacement coins increased with their leader. These developments led Atrium to cross the $ 1,800 mark with a $ 400 increase in one day. However, ETH has fallen slightly since yesterday and is below this sensitive level.

Binance Coin and Litecoin remain almost unchanged, trading at around $ 275 and $ 195, respectively.

As expected, the situation has been significantly more volatile among low and medium market value altcoins. Meanwhile, Theta Fuel had the best performance with 50% growth. It is followed by Hedera Hashgraph (25%), THETA (19%), Basic Attention Token (15%), Zilliqa (12%) and Bitcoin Gold (11%).

The relative cessation of large market altcoins has helped bitcoin reassert its dominance in the cryptocurrency market. Thus, the benchmark for comparing the market value of BTC with other altcoins has reached above 61%.

An overview of the cryptocurrency market Wednesday, February 24

An overview of the cryptocurrency market Wednesday, February 24

After another volatile day, BTC was able to recover some of its lost value today and trade at $ 50,000. Most alternative coins have also breathed a sigh of relief, and the value of the cryptocurrency market has risen by more than $ 130 billion.

It can be said with confidence that BTC is having better days than in the last 96 hours. The cryptocurrency recently set a new record at $ 58,400, but the bears did not allow the price to rise further, pushing Bitcoin to more than $ 13,000, hitting $ 45,000.

Yesterday, the market's top cryptocurrency was initially close to $ 50,000, but adverse price movements pushed the asset back to $ 47,000.

Since then, BTC has improved somewhat. The price of Bitcoin even reached $ 51,500, but is now trading at around $ 50,400 with a slight decrease.

Altcoins trying to recover the price

In the latest market corrections, most replacement coins fell even more than BTC. Atrium fell below $ 1,400 from its $ 2040 record. However, ETH did not fall below its record price floor and is now trading at around $ 1650.

As a result, the cumulative capital of the cryptocurrency market also returned somewhat from yesterday's low, rising $ 130 billion to $ 1.51 trillion.

An overview of the cryptocurrency market today Tuesday, February 23

An overview of the cryptocurrency market today Tuesday, February 23

In the last 24 hours, we have once again witnessed the emergence of a very unstable nature of the crypto market. Bitcoin has pioneered this trend with a significant drop of $ 11,000. Most of the alternative coins also went downhill, eventually losing more than $ 260 billion in cryptocurrency.

A popular saying in the cryptocurrency market is "this market is never stagnant or boring." Now, in the last 24 hours, the term has become more prominent, but this time with a negative aspect. Bitcoin had recently reached its highest price at $ 58,400, and although everything seemed quite bullish for this asset, the situation changed completely within a few hours.

However, Bitcoin failed to sustain this improvement and once again fell below $ 50,000. At the time of writing, the market's top cryptocurrency is being reconsidered and is currently trading at $ 47,920.

Finally, the bitcoin market capitalization fell by more than $ 100 billion in one day, reaching below $ 1 trillion.

Sea of ​​Blood in the Altcoins Market

As in the past, the price correction trend in the Altcoin market is more intense than in Bitcoin. Atrium dropped more than 15 percent in 24-hour timeframe to $ 1,600. Due to the fact that the price of this leading currency was more than $ 2040 in just a few days, following this fall, Ether (ETH) has lost more than $ 400 in a few days.